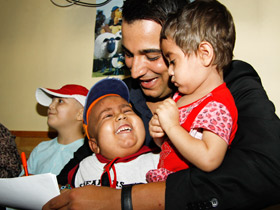 The youth of Iran have made their country proud in the 2012 London Olympics.
The Iranian team’s commitment and hard work yielded four gold medals, five silver medals, and three bronze medals in total. MAHAK Charity Organization congratulates Iranians across the globe for this achievement.

Before heading to what may be the biggest contests of their lives, athletes build their morale and the will to win by going into environments that elevate their psychological state of mind, their concentration, and their need to find an additional inspiration or incentive for performing at the top of their game.

Ehsan Haddadi, the Iranian champion who won a silver medal in the field of discus throwing, which is the first track and field Olympic medal ever won by an Iranian athlete, chose MAHAK as a place for boosting his morale before leaving for London. He spent happy moments alongside children who themselves are symbols and champions of will and determination. When on the podium fulfilling his lifetime dream by receiving his silver medal, Haddadi bestowed a smile at the children suffering from cancer who were watching him on television from their hospital beds.

For more than twenty years, MAHAK has been positively committed to helping children and their parents fulfill big and lofty dreams of health and ensuing happiness with the tireless efforts of kind and responsible supporters like you. The objective is that with the help and support of MAHAK, no child suffering from cancer will perish as a result of poverty and inability to pay for treatment.

MAHAK again congratulates for the children of Iran’s victory and hopes that all of MAHAK’s children use the road to recovery as a stepping stone towards success and triumph in life.