The Importance of Conducting Awareness Instructions in Diagnosis of CMMRD Syndrome 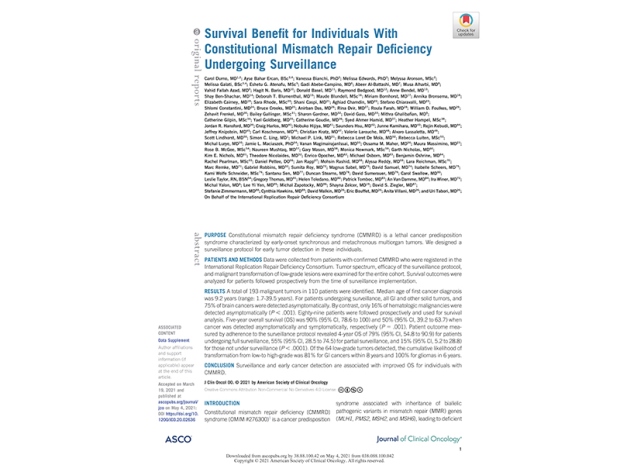 An article entitled “ Survival benefit for individuals with constitutional mismatch repair deficiency undergoing surveillance” has been published in the American Society of Clinical Oncology Journal by “International Replication Repair Deficiency Consortium” in May  2021. Therefore, we have had an interview with Mithra Ghalibafian M.D. who is MAHAK’s representative in this consortium.
To elaborate on the article’s topic, Mithra Ghalibafian states:” Constitutional mismatch repair deficiency (CMMRD) syndrome is caused by a disorder in the enzymes involved in repairing DNA or genetic material. In all cells, genetic material copies itself during cell division. In some cases, this copying does not occur very accurately. There is an enzyme in all cells that is responsible for correcting this difference and synchronizing the two copies perfectly. In children with CMMRD syndrome, this DNA repair system malfunctions. Therefore they are susceptible to have highly invasive tumorsSome brain tumors, gastrointestinal malignancies , and blood or lymphatic cancers  such as T cell leukemia or lymphomas,   besides few characteristics clinical findings , should alert the physician about the presence of this genetic predisposition in the sick child. As soon as gastrointestinal cancer - which is typically more common in adults - is found in a child, the first probability is that the child has CMMRD syndrome. Children who are the result of consanguineous marriages are much more likely to develop this syndrome than other children. These children develop tumors with a very high degree of malignancy, mutation, and invasion.
In this article we have tried to provide an inclusive monitoring and care protocol to facilitate the child's recovery process, and also offer important research outcomes for the child's parents and other children in the family.
Children with CMMRD usually inherit a defective gene from their mother and a defective gene from their father. In other words, parents or second-degree family members from whom the gene can be passed on to the child have a defective gene. This defective gene leads to Lynch syndrome. This gene controls how cells divide in the intestinal mucosa, which, as a result of its defect, increases a person's risk of bowel cancer. It should be noted that a defect in these genes does not necessarily cause cancer in all people, but increases the chances of getting cancer. Women with Lynch syndrome are also at higher risk for uterine and ovarian cancer. Parents with one defective gene or Lynch syndrome, are not as likely to get cancer as children with both defective genes or CMMRD. When we diagnose a child with CMMRD, we need to find which parent has Lynch syndrome in addition; parents and other children in the family should all be under a follow-up program. The purpose of this article is to highlight the importance of these follow-ups. To date, no definitive treatment  has been found for these children. Immunotherapy holds promise but this treatment is not always affordable  and is not easily done in every country; therefore, if tumors can be removed from the child's body by surgery in the very early stages, the child will be much more likely to be cured.
Regarding the measures we should take for children with CMMRD syndrome; Ghalibafian added: “The article published by the ‘International Replication Repair Deficiency Consortium’ clearly shows that if the given instructions are followed regularly, we can find the tumors in an early stage which will help the treatment process and will make the family members cognizant about the possible dangers they may face. These instructions which should be followed include: diagnostic ultrasound, MRI, and special blood tests that can be easily done in our country.  It is really crucial to follow these guidelines in developing countries like Iran which have many consanguineous marriages and very limited medical resources”.
In the end, Ghalibafian highlighted the importance of learning about the CMMRD syndrome by the medical teams.
Click here to read the “Survival benefit for individuals with constitutional mismatch repair deficiency undergoing surveillance ” article.