An Interview with Dr. Naderi, Oncologist at MAHAK Hospital 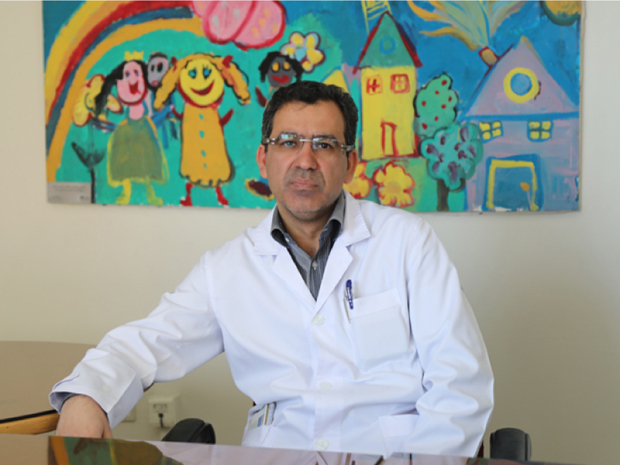 An Interview with Dr. Naderi, Oncologist at MAHAK Hospital:
The best method to detect cancer in early stage is through periodic check-ups and tests
Recently, you may have seen the measures taken by MAHAK charity to raise public awareness about pediatric cancer; the city’s well-known monuments illuminated, a social media post launched, a photo that refers to this issue designed and the gamut of writers, artists and celebrities who have officially announced their support for this global campaign.
On the occasion of this campaign with ultimate goal of raising awareness about cancer among the society organized by MAHAK as a full member of Union for International Cancer Control (UICC), we interviewed Dr. Naderi, a pediatric oncologist at MAHAK Hospital to provide answers to the most common questions raised about cancer in children.
Our first question was about the causes of cancer in children. “In adults, lifestyle is one of the proven factors that affect the risk of cancer. But in pediatric cancer, lifestyle does not play much of a role. Although there are no complete set of definable causes for incidence of cancer in children, factors such as genetics and family roots, malnutrition, stress, mental health disorders and parental depression, and unhealthy drinking water and polluted air can all contribute to cancer in children.”
Dr. Naderi continues to describe the symptoms of cancer in children. He stated that: “the existence of an unusual lump or swelling, weakness, fever, lethargy, bruising, dizziness and imbalance, persistent headache, diplopia, persistent nausea and enlarged lymph nodes in the neck or groin of the child can be a sign of cancer. It is important to note that these symptoms do not necessarily mean that a child has cancer. However, it is highly suggested to refer to a physician as soon as you notice any of these symptoms in your child. The earlier these symptoms are diagnosed in a child, the more effective treatment process will be and the higher the chances of remission."
The best way to diagnose the disease early - both in children and adults - is to have regular routine checkups and tests. “The time interval between tests varies according to the age of the child. New born and infants should be checked every two weeks or once a month during their first 6 months of life. A blood test should be taken once a month in the second 6 months of life, and once every three months in the second year, and every six months from the third year onwards. The importance of these check-ups and tests becomes even greater when we know that sometimes cancer affects the body asymptomatically so, it is only diagnosable through these tests.”
Regarding the most common cancers in children, he said: “Acute Lymphoblastic Leukemia (ALL) is the most common cancer among children; some of its symptoms are weakness, lethargy, fever, infections that do not heal quickly, as wells as oral ulcers and easy bruising. According to the World Health Organization, Wilm's tumors, Low-grade Glioma, Hodgkin Lymphoma, Non-Hodgkin Lymphoma, and Acute Lymphoblastic Leukemia are the most common types of childhood cancers."
Dr. Naderi continues: "genetics affect some types of cancer, such as retinoblastoma. But in general, if occurrence of cancer diagnosis is high in a family, children are more likely to get cancer. But there are currently no accurate diagnostic tests to predict this before birth."
Emphasizing the importance of early detection and wishing recovery for all children suffering from cancer, Dr. Naderi added: “To correctly diagnose any type of cancer, special tests are needed which differ depending on the symptoms that appear in the child. In other words, it is not possible to recommend a specific test for all children and the type of test should be determined by a physician. So, for early detection it is very important to refer to a physician as soon as any symptoms are detected."
During the past 29 years of activity and with the cooperation of its ever-expanding family, MAHAK has planned and implemented measures to raise awareness in the community about childhood cancer including the symptoms of six common cancer types. In its path towards excellence and alongside multipronged measures to reduce the incidence rate of childhood cancer, implementing more effective treatment methods, and providing comprehensive support and treatment services to cancer-stricken children and their families, MAHAK has strived to expand its cooperation with national and international research and treatment centers in the field of cancer as an active participant in the global best practices standards and procedures. We look forward to the day when diagnosing and treating this disease will become rudimentary and benign.