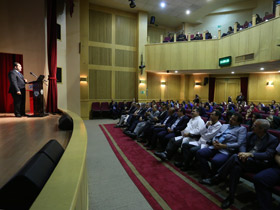 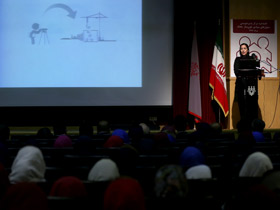 Saba Kamkar, manager of public and international relations department of MAHAK, after delineating MAHAK’s three main stakeholder groupings as service recipients receivers, financialcontributors and the society as a whole said: “establishing this center for donating hematopoietic stem cells is the first CSR project in this field and properly addresses stakeholders’ expectations after 9 years of research and analysis.”
Referring to MAHAK’s laboratory and transplantation specialists’ considerations about the necessity and importance of founding a center for providing required hematopoietic stem cells samples and its financial challenges, she stated: “the process of HLA typing for each donor costs 4,000,000 IRR (almost $100) which is covered by the private sector through an MOU as a social responsibility project.”
According to the aforementioned Memorandum of Understanding, Bahman Motor Co. and Bahman Diesel Co. are committed to funding for HLA typing experiments of 5000 donated samples of hematopoietic stem cells by allocating a fixed percentage of their sales revenue to found the first non-governmental registration center for donating samples. In continue, she added: “We hope that by continuous support of the ever expanding family of MAHAK, by 2021, this center will become one of the largest of its type for donated samples of hematopoietic stem cells in the Middle East.
Saba Kamkar entitled this project as ‘MAHAK’s social responsibility in practice’, since this center’s database will be accessible for all people in Iran as well as neighboring countries. She also declared that establishment of this center for registration and donation of hematopoietic stem cells is a new partnership method in supporting cancer-stricken children and improving Iranian civil capacity.
No Matching Donor for a lot of Patients in Need of Transplantation
Dr. Vahid Fallah Azad, clinical and anatomical pathologist and MAHAK’s lab director analogized hematopoietic stem cells to seeds that are isolated from bone marrow, peripheral blood or umbilical cord and injected into the bare earth, body, which has already undergone a chemotherapy process; and stated: “low effectiveness and high cost of collecting samples from international stem cells banks, lack of donors in national stem cells banks as well as increasing the number of one-child families have resulted in the fact that a lot of patients in need of transplantation cannot find a matching donor among their family members. These are what primarily inspired MAHAK to establish a registration center for donating hematopoietic stem cells samples.”
The Importance of HLA Matching in Stem Cell Transplantation
Dr. Fallah Azad, stating that MAHAK is the first center using saliva samples for HLA typing said:” the first hematopoietic stem cells registration center was established in Iranian Blood Transfusion Organization in 2009 and the national network of hematopoietic stem cells donors was formed in 2015 with 9 centers. Since September 2016, it has become possible to search for more than 30 million donors and more than 700,000 units of umbilical cord blood in the global network of hematopoietic stem cells donors.”
He explained that: “Human Leukocyte Antigen (HLA) typing is used to match patients and donors for bone marrow or cord blood transplants. HLA are proteins found in most cells in the body including white blood cells.” Emphasizing the importance of HLA in stem cell transplantation, he added: “A close match between a donor’s and a patient’s HLA markers is essential for a successful transplant outcome.”
Regarding the eligibility of the hematopoietic stem cells donors, Dr. Fallah Azad said:” there are a few conditions for a proper donor including being in the ages 18 to 50, no history of cancer or chemotherapy, and no contagious blood disease such as AIDS or hepatitis.  Once these conditions are met, HLA genes in classes 1 and 2 will be analyzed according to Molecular and SSO hybridization.”
Mother of a Cancer-Stricken Child in Need of Transplantation at Top of the List of Donors
A speech by one of the cancer-stricken children's mothers was another part of this event.  As a mother who is waiting for a compatible sample for her child, she talked about her willingness to join MAHAK’s registration center and said: “It is one year that we are involved in my daughter's blood cancer treatment. When doctors told me ٍthat Elaheh, my daughter, is need of transplantations, I was wondering if there is any compatible donor for her. Thank God, her brother’s HLA is compatible with hers and the operation will be done very soon.”
She continued:”I see and know a lot of children like my own daughter to whom stem cell transplantation is a light of hope. However, they are provided with comprehensive medical and treatment facilities but their treatment continuation depends on finding a compatible donor. Today, I will join MAHAK’s registration center for donating hematopoietic stem cells in order to not letting other cancer-stricken children get disappointed.”
The Largest Hematopoietic Stem Cells Registration Center by 2021
MAHAK deeply hopes that with reaching the project’s objectives by the first of 2018, the 2nd phase will initiate with the aim of connecting international hematopoietic stem cells banks and predicts that by endless love and support of the ever expanding family of MAHAK and Iranian civil capacity, this center will be one of the largest centers in the region.