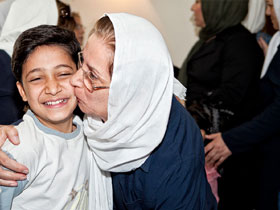 Volunteers are one of the main pillars of the MAHAK community, as well as our greatest asset.  Perhaps best defined as philanthropists who perform good deeds without payment, here in MAHAK volunteers accept and take responsibility for tasks related to MAHAK’s mission.  The only difference between a volunteer worker and an employed staff member is that a volunteer does not receive any form of financial compensation.  In all other aspects they are identical.  To emphasize how highly volunteerism is valued, the voluntary nature of the position is often acknowledged.

Volunteerism is prevalent throughout MAHAK, from our founder to the members of the boards of trustees and directors.  Furthermore, many of the most prominent physicians in the field of cancer treatment and research work for and support MAHAK voluntarily.


MAHAK needs the energy and support of volunteer workers for a number of reasons:

Over time, volunteers become ambassadors for MAHAK spreading our message of charity throughout the world.  The heart of every organization is in the souls of its founders.  The founders of this organization and its very first volunteers have been around as long as the organization itself.  In the last twenty-five years, MAHAK has grown steadily and as a result, the number of volunteers has grown too.  In the beginning, there were but a few dedicated volunteers but now the numbers have risen to in excess of four hundred people.

Today, with the organization’s steady rate of growth, all volunteers work as active members of MAHAK’s extended family.  The first and the oldest branch of volunteers known as the Peer group goes back two decades, and the second oldest branch is the Youth group.  MAHAK is held together by core groups of volunteers such as the members of the board of directors and the members of the board of trustees.  Furthermore, MAHAK is honored to have had the full benefit of physicians like the late professor Vossough, MD, a renowned specialist who after formal retirement from academia chose to work at MAHAK as a volunteer until the very last day of her productive life.

At MAHAK, even the employed staff are considered volunteers, because each one of these talented and experienced staff members could earn a much higher salary elsewhere.  The head of the Support Services department, the Managing Director, and a number of other experts have all worked extensively as volunteers for the organization before becoming paid staff members.  The relationships built between the staff members and the volunteers are mutually beneficial and our team members often experience a high level of satisfaction and even elation in performing their jobs: contributing to the welfare of our cancer patients or simply easing the pain.  As a member of MAHAK’s extended family, not only do our volunteers find satisfaction in their jobs but they also grasp the meaning of responsibility towards others on a larger scale.