Eyes of the Heart; A Better Way to See 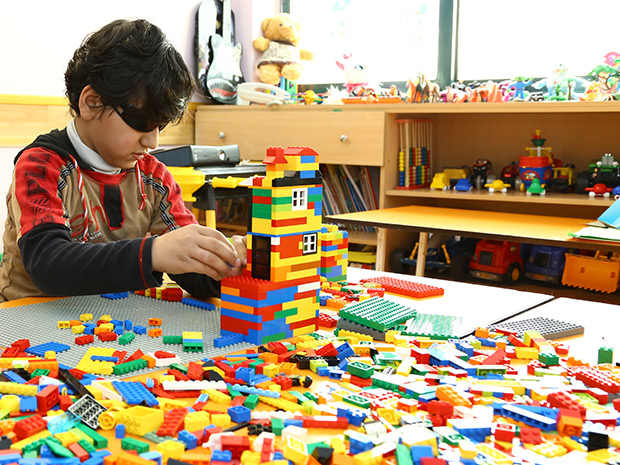 “The story began the day we were told that Reza cannot see anymore. He just turned seven. It was the early days of school. I assumed that the flame in him for learning, playing and observing suddenly streaked off.
One of these days when he was so tired and nervous due to chemotherapy, I went to the playroom to find something for him to play. The psychologist in the room gave me Legos. I had doubt to take it or not. anyway, Reza started to play. Meanwhile, looking at him playing with the Legos I thought about the days after his diagnosis that I was full of stress and completely desperate to get along with him. With all these thoughts with such fear of tomorrow I slept.
The day after, with children’s sounds coming from the corridor laughing and playing, I woke up and believe me, what I saw was honestly fantastic. Reza made a house with every facility you can imagine. The rooms were separated, the stairs, windows, doors, everything. You cannot believe, even the kitchen had oven and fridge.
Since then I knew very well what makes Reza entertained and reduces his tension and stress. He spent hours and hours in his room to make new things. Once the doctor came to his room for a normal check-up, he saw a fun city at Reza’s room and said: ”Good for you, your mom is very talented.” We both laughed and I told the doctor that Reza himself had made it. The wonder in his eyes was the same as mine when I saw his first Lego construction.
Now a days, Reza is going to the school for the children visually impaired. What made me worry about my son few years ago makes me proud of him now. Reza can make different shapes with Legos only by touching them. He had never seen a sewing machine before but after touching it, he made a running one.
It is four years that Reza is cancer free and nothing could have stopped him from learning new things. I believe in him and I know that with skills he has and the journey he has passed; he will be one of the most successful people in the society. I hope that all the children with cancer will be remitted soon and there will be no children in pain anymore.”
Reza’s Mother