I am Amir, the cancer survivor! 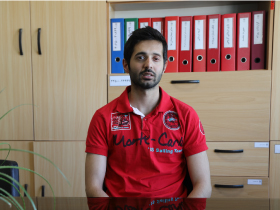 Have you ever tried to do sport

Have you ever tried to do sport? This is the first sentence which is said by Amir after he remembers his hard treatment days. He was afraid of not being able to grant his wish because of cancer, till he visited Professor Parvaneh Vossough. Amir says: “Professor Vossough was the first doctor who told me I would defeat cancer and would be able to do my favorite sport. This inspiring sentence made me fight cancer with higher motivation. I went into remission after a year and started to do table tennis and received national and international achievements.”

During Amir’s treatment days his parents worried that their child’s wishes could not be granted but Amir’s wishes came true and he could become the hero in his own life. Each day six new cases of children with cancer join MAHAK to receive treatment and support services which means your care and patronage results in the recovery of more and more children who can be heroes like Amir.