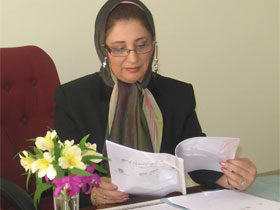 On a cold winter day in 1989, a two-year old girl named Kiana was having her regular check–up when her physician diagnosed her with an illness that would shake up any mother. Like any mother hearing this, her mother Ms. Saideh Ghods went into a denial state, not accepting the truth. After many trepidations, doing a lot of research, and having many consultations with doctors and friends, she realized that cancer like many other diseases is curable and has its own phases of treatment.

There were a lot of difficulties during Kiana’s treatment. The required medication was scarce and very expensive. Not having enough information about cancer and the side effects of the drugs while witnessing her daughter's suffering, life had become barely tolerable for Ms. Saideh Ghods.

While referring to hospitals, Ms. Ghods saw fathers and mothers travelling from far and often disadvantaged regions struggling with financial difficulties of paying for expensive treatment of their child and a place to stay in Tehran for the duration. Sleeping in hospital yards or in  street corners, many had become aware that cancer is a disease that may require more than a single treatment. In actuality, it may take years of overwhelming pressures, an experience during which many families did not survive as a unit.

She became intensely preoccupied with the idea of offering a little help by providing a place to stay for the families. She was constantly thinking of what could be done? At that time some of the tests were not performed in Iran, so she decided to continue her daughter's treatment in Germany.There she became exposed to and joined parents groups whose children had cancer. Experiencing therapeutic relief as a result, she realized it would be a good idea to form such an organization in Iran. At the time, this was not feasible however. Being a multi-ethnic nation many of whom associated cultural taboos with known cancer cases, Iranian parents were not ready for this approach. Consequently, she decided to place her initial focus on helping cancer-stricken children directly and parents indirectly.

In 1991, she formally registered MAHAK as a charity institute to support children with cancer. However, from 1989 related volunteerism was taking place by caring individuals in several public and university hospitals. While assisting confused parents, these folks carried name badges identifying them as supporters of parents with cancer-stricken children. But since the word cancer was written on their badges and this carried a strong stigma, MAHAK volunteers faced tremendous difficulties in their function. Therefore, the decision was made to use only the first initial of every word, thus forming the word 'MAHAK' for the very frist time. Needless to say, this name has global recognition today, as witnessed by a basic search in an international search engine on the internet.

Once sufficient volunteer support and financial means through bazaar sales had gathered, the Board of Trustees decided to purchase a land and construct a purpose-build structure in Darabad in northern foothils of Tehran. They succeeded in buying a piece of land of 4700 meters square on the beautiful hillsides of Darabad. But constructing a building that contained a residentail shelter as well as offices required much more funds. It did not take long before Mr. Karbassi-zadeh who wanted to make his wife’s death-bed wish came true appeared.

Through friends he had become acquainted with the name and some of the individuals involved with MAHAK, received and approved the building plans, and after about a week, gave his approval and financial backing but there was an important condition -- his wife Afsaneh Dabiri had insisted on establishing a specialized cancer hospital and not a shelter before she passed away.

On his next trip, Mr. Karbassi-zadeh in the presence of Tehran mayor, and having received the official approval for the expansion of the building invested 20 Billion Rials in order to start the construction.

Ms. Dabiri although very sick, made the trip to Iran to see the outline of the building but unfortunately by the time the hospital was inaugurated, she was no longer with us. She left this world on the 25th of Khordad. In her memory, MAHAK staff, supporters and volunteers have named that date “MAHAK’s Philanthropy Day”. The hospital was officially opened in 2007 and today it is the single largest and best equipped pediatric cancer hospital in Iran and the Middle East offering all medical services, housing a compolimentary residential cenetr for parents, and contains all the offices of MAHAK Charity-Care organization. By 2014, MAHAK has provided comprehensive coverage and treatment to over 23,000 children with cancer and their families through its ten divisions, two residential centers, over ten fundraising offices and booths, over 700  employees, thousands of volunteers, and over 80,000 members.